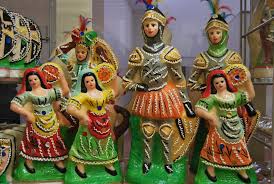 The “Pupi di Zucchero” also called “Pupaccena” is a Sicilian tradition created for the “period of the dead”.

The “Pupi” are anthropomorphous statues made by sugar and painted with vegetal colours. They seems like heroes and typical characters of the sicilian theater.

In the sicilian houses, the 2nd of November, women made the table full of foods. It’s thought that died relatives coming back to have dinner with alive.

The “Pupi di Zucchero” were bought during fairs.

It was necessary a wicker basket where put inside the gifts.

In fact, the Pupi were given with chocolate, dried fruits, marturana fruits and dried bread.

The tradition is lead by the legend of an Arabic noble became poor, that offered the sugar’s statues to his diners for remedy to the lack of food.

Even more a second version dates from the 1574, when in Venice, to celebrate the coming of Enrico III, was organised a dinner where sailors from Palermo, that transported a sugar’s shipment, created this amazing Pupi.

To realize the sweet statue, the sugar is melted in hot water inside a copper pan and mixed with a lemon juice to have a brilliant white colour.

Therefore , the sugar paid into moulds and cooling down delicately.

At last, they are paint with alimentar colours. In fact, the yellow derived from saffron, red from tomatoes, brown from cocoa..

Now the statue is ready to be “impupata” that means adorned with bows.